A "Cinnamon" Kind of Birthday!

Meet Cinnamon - isn't she ADORABLE? Our oldest had a b-day party to attend today, so I used the sketch layout from All That Scraps and made this covered Jr. Legal Notepad. I love making these, I should do them more often!

The inside has a little pocket and we tucked a Target gift card inside - what girl doesn't like to shop?

Cinnamon is by Penny Black. I colored her using Copics and Spica Glitter Pens. I used my Scor Pal across the bottom portion of the Sweet Blush to add tw 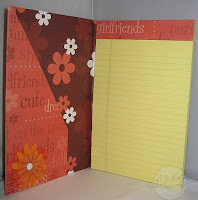 o stripes, then placed Dew Drops in between the stripes. The base is some 2-sided DP I've had for quite some time - I love all the 'girly' sayings you see on the outside; but wait until you see the inside - BAM - it's beautiful too!

You can see I placed a strip of the DP across the top of the Jr. Legal Notepad to tie it all together. I also added 2 flowers and a large white brad to the lower left side of the pocket and mounted with dimensionals. 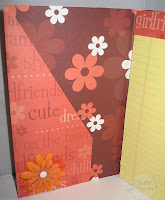 Here's a close-up of Cinnamon and also a picture of the Copic Sketch Markers I used. Mine were purchased from Ellen Huston's store. I have 3 s

ets, and I'd like to get 1 more set; then I'll begin filling in with extra colors I can't live without. LOL 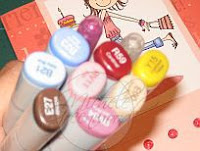 I added a prima to Cinnamon's hair; there really is a flower in the image, but I wanted it to be real and not just colored. If you look closely, the prima has polka dots. It was originally white with blue polka dots, I needed burgundy so I colored it with my Copics and voila, I have burgundy. Love that about my Copics!! I also added a little jewel to the center of the flower, just to give her a bit more bling. Her purse and belt also have their own little sparkle going on. Girls gotta have bling ya know!

We've got a really crazy and busy weekend, but I hope to find some more time to stamp; it's always such relaxation for me! What about you - what's in your plans for the weekend?

Thanks for peeking in; hope you have a marvelous weekend! Hugs, ~M.