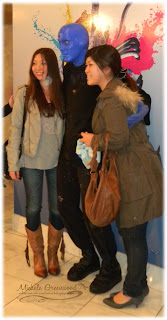 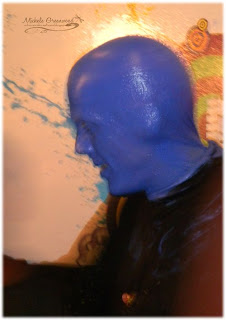 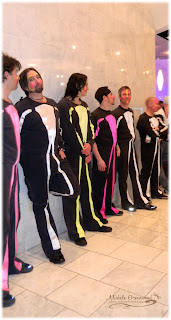 We made it  - we are in Vegas and having an incredible time!

We arrived late Thursday but managed to walk an hour to the Venetian to see Blue Man Group - one word...A-M-A-Z-I-N-G!!!

We purchased the cheapest seats available which indicated "obstructed view" - HA, no such thing, we could see it all and were just as involved as any other audience member.  The Hubster was handed a bowl of cereal and 2 flashlights to hold in the middle of the program.  Hilarious!

The ending?  Well, it's like a combination of toilet paper/paper towels on 100's of rolls at the back of the theater.  They let 'em fall and they pull the paper all the way to the front meaning it goes over every single audience member; air is blowing, they are whipping it around, it's hysterical.  The Hubster and I were kind of on the outside area (supposed to be obstructed) so we really weren't involved in the TP incident until ONE Blue Man Group dude realized we weren't involved.  He handled it by balling up a HUGE amount of paper and whipping us with it - around our heads it went, in our faces, my hair was literally going EVERY.SINGLE.DIRECTION when he finished. We laughed till we cried.

They also walked across the back of chairs people were sitting in, it was wild.  If you make it to Vegas, you really should see their show - so worth it!

On our way out, the Hubster happened to turn around and saw the band members and the Blue Man Group - all available for pictures; so we snapped a few.  No, I don't know those chicks in the picture, they were just there.  HA!

The band member's suits glow in the dark as does their face paint - so cool.

I have tons more pictures to come, we just haven't had ANY down time; I haven't walked this much in ???...forever I think; we are exhausted each evening!

Tomorrow is the BIG RACE; cannot wait, we ran into one of the youngest driver's in the mall tonight; he had his cap pulled down low and was texting, but I got my camera ready, hollered his name, he gave a big grin and I snapped the picture.  Oh yeah; I was so darn pumped.  Didn't intrude more than that; just hollered thank you!

Thanks for popping in; hope you are having a great weekend.  I'll be sharing lots of personal pictures over the next couple of weeks AND I promise to return with some crafty things soon!  Hugs, ~M.