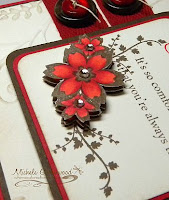 Yes, Mother's Day is quickly approaching...I'll have cards made for everyone else's mother except mine and my mother-in-law - YIKES; I'm going to be in so much trouble.

I made this one for a friend's grandma that loves red; I accented with brown and ivory, embossing the ivory mat with Stylized Flowers embossing folder and then gently sponging SU! Close to Cocoa over the embossed image t 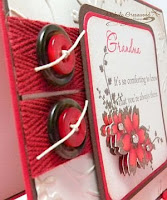 o give it a bit of pop and then sponged all the edges with more Close to Cocoa.

I used Verve's "Because of You" set for the flower in the corner of the main panel; I stamped it 3 times so I could layer the image and give it lots of dimension. It's really hard to see in the picture, but I colored all the edges of the flower in the final layer with a Clear Spica Glitter pen...great sparkle IRL. The "Grandma" sentiment is also from the same Verve set; but the other sentiment, "It's so comforting to know that you're always there." comes from PTI's "Mother" stamp set. 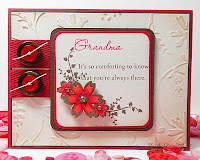 I added some incredible red twill tape which I bought online from Etsy, a couple brown & pure poppy buttons as the final touch. I hope someone's Grandma really likes it!

Thanks for stopping by; it's always great when you visit! Have a great week! Hugs, ~M.

Random Fact: On the new hundred dollar bill the time on the clock tower of Independence Hall is 4:10.