As I mentioned on my Twitter account this weekend, we lost a very dear co-worker Sunday. We got the call October 2 that he wasn't feeling well and followed his journey from there, a journey that took him from one end of the USA to the other...but never for a minute did we think his life would end! Just a little over a month and he's gone; lots of heavy hearts. My boss, a great Christian man, held a prayer meeting Monday via conference call during the lunch hour - lots of people called in and 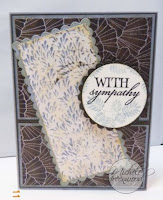 lots of people from the office joined in the meeting; many spoke of what a great human being our co-worker was. He was such a joy-filled man! It was my pleasure to call him a co-worker, but more importantly to call him friend!

I made this sympathy card Sunday evening using Jen's Sketch For You To Try. The DP is from Basic Grey's Granola paper pack. I used Verve's "Forever in our Hearts" stamp set - one of my 'go to' sets for sympathy cards time and time again!

The only stamping on the front of the card is the "with sympathy" which is highlighted with a clear spica glitter pen, the s

mall leaves from the "Forever in our Hearts" below and around the circle and then also stamped on the elongated panel in Vintage Cream.

We mailed the card today to our co-worker's mother; I hope we were able to convey how much her son meant to each of us.

Thanks for checking in; I hope you're having a great week! Hugs, ~M.