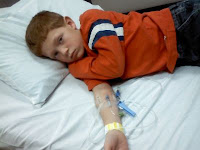 Our son has been very ill for 6 weeks; I think we reached the peak last night and I reached my wits end! Here are a couple of pictures from the hospital; the first is shortly after they started the IV drip and gave him nausea and pain meds.

The pain med didn't do much; within an hour he was crying and screaming again so they gave him some more nausea med and then a dose of morphine; when they finished pushing the morphine in, he yelled, "I'm going numb!"; it was the side effect of the morphine but scared him to death...(me too). He literally passed out after the morphine went in as you can see from the 2nd pictu 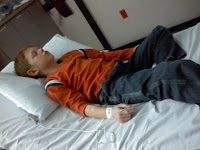 He's a very tough little boy; he has never cried when they've drawn blood, or started an IV or anything - but this stomach problem brings him to his knees. If he's not better next week, we'll be seeing a pediatric GI doc. I pray we don't have too; but we'll do whatever we have to do - we want him healthy again!

Thanks for stopping by; hope you have a great weekend! Hugs, ~M.